Slightly suspicious activity or so

I didn’t know where to report at, but I found it slightly suspicious that the most recurring activity for Sahaan Corp is to accept money. >.< 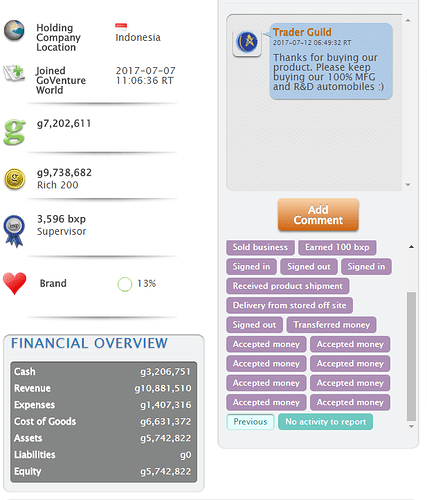 Good observation. Yes, this could very well indicate a player managing multiple accounts. We will look into it.

This player clearly isnt aware of the paper trail that he is leaving behind.

More odd behaviour… Created account and went straight to spending all the cash on stocks by the least suspicious company ever.

https://play.goventureworld.com/Website/Index/DIKA%20Holding <-- linking since it doesn’t show up in the list. I guess it was used for shady business before completing the holdings company creation. 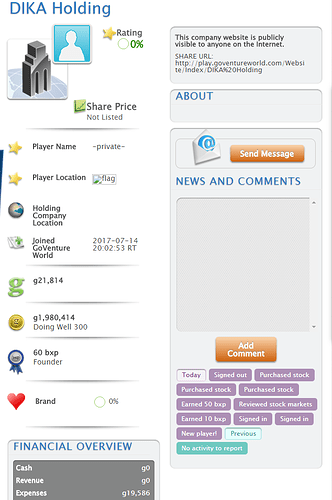 What does delivery from stored off site mean??

@ Jobsons - introduced this round to facilitate charging when retailers go over their storage limit.
@ Zuzu - well we all know which company is the head of the snake!

Edit: more info below
(And this just replaces the ultimate I saw which was create a new account and just transfer the cash straight out - same culprit but now he’s using the new account to buy up shares in banned companies)

They are so sloppy in how they are cheating. lol

but eventually this will get burnt out or caught. Hopefully the admins put out a bounty with a high rewards lol

Trader Guild is the one benefiting from that transaction and the one orchestrating many other accounts. His account is the one that should be frozen / cancelled. Let him cheat but have to start from scratch each day until he learns…

We will make sure to cancel all accounts that are related in cheating.

Thank you @Fireyscorp, we will investigate.

ACS Industries is no more.